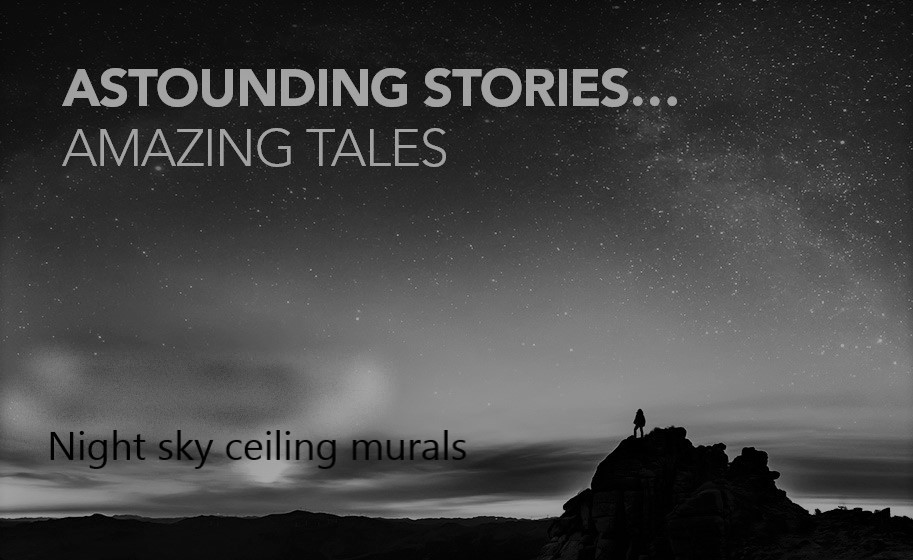 A little girl who was nine years old.

In the Merseyside area on the autistic spectrum, and she wouldn’t sleep at night unless all the bedroom doors were open, and all the lights were on, in all the bedrooms and there was four of them with the bathroom light & landing light on all night’Honestly with all the lights on, and the lights had to be left on all night. If anyone shut the doors or turn the lights off, then pandemonium would break out. Obviously it was easier for the parents to leave all the lights on all night long.After being in, and designing the night sky ceiling.The parents sent me a lovely message back saying that for the first time in nine years. Their daughter went to sleep that night, with all the doors shut, and the lights off, so she could see her night sky ceiling, and slept soundly. Now every night, with the door shut and the lights off, so that is a positive result for an autistic child, changing the habits, and being able to sleep in a relaxing, calming atmosphere, with mum and dad a lot happier because we’re less lights on so everyone else in the home slept easier.

Two little twin girls, that were three years old, Autistic and non verbal, and mum was a single mum. She was pulling her hair out for different things that would actually positively work. There’s a lot of Sensory items that they claim in the Sensory world that works, and lots of the things cost a hell of a lot of money, but nothing works for everybody.So she decided that she had tried everything, she was prepared to have the night sky ceiling, and see whether that would work as most parents with children that are on the spectrum, sometimes get too close to breaking point.Not being able to get enough sleep for the body to function correctly. And so, she wanted the night sky ceiling to see whether , the twins would react to this however being nonverbal you struggled to get a positive reaction to see what the outcome might be just from showing them. So I designed the night sky ceiling for them, and the next day, I got a positive response back from Mum,The twins used to wake up approximately 2 am every morning.Being awake at this time, and full on all day is what would be classed as normal.However its not enough sleep to recuperate the average person, or certainly not for mum. But, after i designed the night sky ceiling, the twins actually slept till 7.30 am that morning. It’s quite an extended amount of sleep from 2.30 am to 7.30 am to sleep helped by a night sky ceiling. It helped them relax, and they slept soundly for 5 hours longer every day since.

After I received a phone call from a lady saying that she would like me to come along and design the night sky ceiling for her granddaughters as their mother, the little girl’s mummy had died tragically.In fact, she’d been murdered. Although the night sky ceiling has worked for many different reasons. This was the first one that ,Basically they wanted a night sky ceiling to help the two little girls get to sleep at night. Through the trauma they have been through,with something to remember mummy. Sleeping under the night sky ceiling to remember mummy, And what I did over the bed,was put a different color to the rest of the stars of a bright shooting star,To remember mummy.And after I’d done it, I got a message back saying that what the family did is, let the two girls into the room. Explained to them what was on the ceiling, and left the monitor on that was in there because the little girl at the time had just turned two. And the older sister was four. The family could hear on the monitor, that the eldest one was telling the youngest one, Ho look, there’s a shooting star to remember mummy! Heartbreaking, But the joy and the pleasure that I get from designing the night sky ceiling,that the comfort and calming relaxation that it brings to clients in a positive way.Designing the night sky ceilings,Outweighs any job I’ve ever done. It give me immense pleasure.What a rewarding feeling that it brings so much joy to each of the clients.*In memory of Leanne*

Many clients when contacting me briefly explained why they wanted a night sky ceiling mural.On this particular phone call it was for a little boy in Cumbria ,who had just turned 4 year. After many visits to the doctors with her son, Mum knew something wasn’t just right with her little boy. Dad simply put his son’s development down so he hadn’t quite got there yet.In a visit to the doctor, the doctor just blurted out to mum ” Your son is non verbal autistic” Wow a bombshell for anyone to absorb.Now that both parents and family members knew that Autism was a part of their lives.I have been designing for sensory needs since 2007 and have met a lot of amazing families and children on the spectrum.At the early stages and struggling to take everything in a battle for understanding begins with a non verbal child it’s hard to understand whether they acknowledge conversation. After I designed the ceiling for this little boy on the second night dad was putting this little chap to bed,Dad asked where are your stars? The little boy pointed to the ceiling twice.Mum & dad called me the next day in an emotional phone call although their little boy is non verbal the knowledge that he responded to dad’s question gave them a positive feeling.